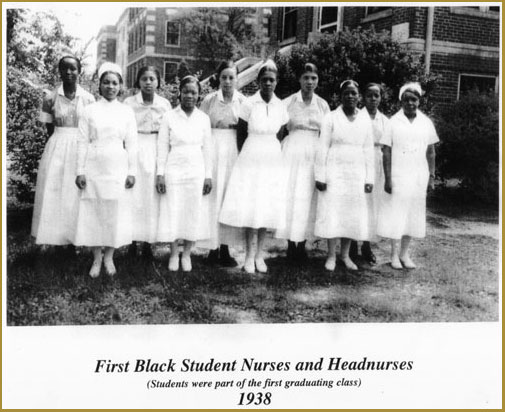 The establishment of the School of Nursing for Black Students was started in September 1935 with ten students, all of whom graduated three years later in 1938. These students were Janie Sumter, Everlou Cook, Bernice Spry Elizabeth Haigler, Cardell Kyser, Mattie Kirkland, Connie James, Jeanette Williams, Inell Richardson and Bertha Brown. The first teachers were Marguerite Welch, Director of Nursing Education, and Eva Simpson, Ms. Welch‘s assistant. The lectures and course work were the same as for the white students. Later, the black and white nursing students were taught by the same faculty.

Shortly after the establishment of the School of Nursing for Black Students, the Alumnae Association for the Black Nurses was organized by Mary Lou Corley, Helen Stahler and Minier Padgette.  Ms. Spry, one of the students in the first class of graduates, was elected president. An additional medical facility specifically for black patients, the Columbia Hospital Harden Street Unit for Blacks, was built in 1942. This facility opened with a capacity of 160 hospital beds and 35 bassinets. 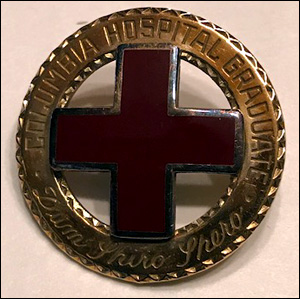 In 1943  the Cadet Nurses‘ Program was established for black and white students.  All students expenses were covered by federal scholarship through the Recruitment for Nurses‘ Program. Girls as young as sixteen were accepted into the program to meet the growing need for nurses. The gray uniform worn by the cadet nurses  was created  by national  designers to attract young women into the armed services. National and local publicity campaigns used the slogan, ―Nursing— The Proud Career‖ to recruit women into the cadet program. The Cadet Nurses‘ Program was discontinued in 1945 with the end of World War II.

A larger residence for black nurses which could house 70 nurses was built in 1944.  This expansion occurred just after the establishment for the Cadet Nurses‘ Program  for  black and white nursing students.  Fifty years of history was celebrated on November 14, 1947 at the Golden Jubilee of the nursing school. The celebration occurred during an all-day event culminating in an evening banquet. Over 700 people attended, including the school‘s second graduate, Ms. Kiernan Poat of the Class of 1900.  At about this time, the South Carolina State Student Nurses organized as part of the National Student Nurses‘ Association. Lillian Kemper of  the Class of 1951 was  elected as the firs  president of the state organization.

The 1950‘s were witness to many progressive events at Columbia Hospital which had a major impact on the quality of the learning experiences for nursing students. In 1953, the first premature nursery was opened under the supervision of Annie Chunn. Black and white students rotated for two-week periods through the nursery for experience in caring for premature infants.

Next, the recovery room opened under the supervision of Marie Lucas in 1954. Black and white students were assigned to the recovery room for two-week rotations to  care for post-anesthesia patients.  Then, in 1955, the milk laboratory opened to prepare and sterilize formula for newborns and pediatrics.  Black and white students served one week in the department. Blanche Lahey was department head of the 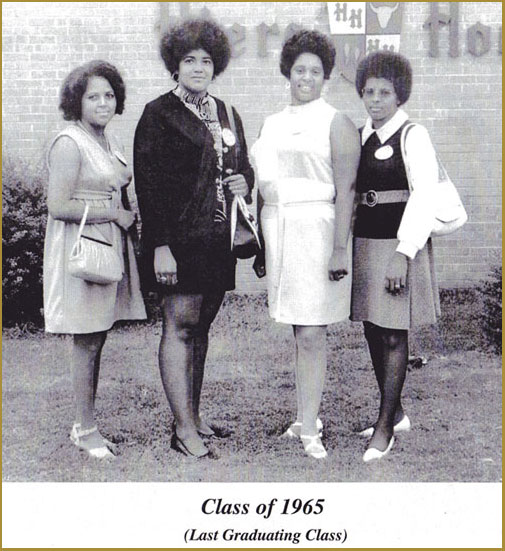 The mid 1960s mark a sad occasion for all Columbia Hospital School of Nursing alumni—the closing of the school. Costs, faculty shortage, and the flow of students to collegiate programs required the Board of Trustees and the Superintendent of Columbia Hospital, and the Director of the School of Nursing to make the difficult decision to phase out the nursing program. The formal decision was made by the Board of Trustees in 1965.

After 69 years of preparing nurses as caregivers, the Columbia Hospital School of Nursing closed its doors. However, during its existence, the school graduated over 1,500 nurses. Separate black and white alumnae organizations have remained active throughout the years since the closing of the school. In addition to regularly scheduled alumnae events, both organizations have taken on philanthropic projects aimed at health care and nursing education.  The Centennial Celebration of Richland Memorial Hospital and the nursing alumni events scheduled in conjunction with this important celebration mark the first time the two alumni organizations have jointly sponsored an event. So, long after the closing of the School of Nursing, the alumni continue to make history.